This illustration is the famous frontispiece of Riccioli’s Almagestum novum a compendium of astronomy printed by the ItalianJesuit Giambattista Riccioli, 1598-1671, at Bologna in 1651. Though called ‘New Almagest’, a reference Ptolemy’s famous astronomical treatise, it was not intended as a straightforward defence of the Ptolemaic universe against the challenge of Copernicus. As the frontispiece makes clear, the Ptolemaic system, lying battered and bruised on the ground, was past recovery. Instead Urania, the muse of astronomy, holds two different versions of the solar system in balance. On the left of the balance is the Copernican system, with the Sun at the centre of the solar system and all the planets in orbits around it. To the right (and evidently the chosen system by its position as the heavier object in the balance) is a variation of the Tychonic system devised by Riccioli himself in which Jupiter and Saturn orbit the Earth (and not the Sun as in the pure Tychonic model).

This juxtaposition of the Copernican and Tychonic systems is mirrored by the juxtaposition of Urania, a personification of theoretical astronomy, with her counterpart Argus whose role as a symbol of observational astronomy is heavily hinted at by the many eyes covering his body. While Urania holds an armillary sphere, Argus holds a much newer device, a telescope, while pointing with his right hand to the many observational discoveries of the seventeenth century: Jupiter’s satellites, Saturn’s rings, Galileo’s mountains of the Moon, not to mention the various comets and planets depicted in the upper regions of the frontispiece, all of which are overseen by the divine injunction to ponder number and measure. As the frontispiece makes clear, this book, purchased as part of Worth’s astronomical collection, sought to assess the competing claims of a number of versions of the solar system. Though it is clear that Riccioli, like many of his Jesuit confrères, supported the Tychonic system which had the merit of keeping in the earth in the centre of the universe but allowing the other planets to revolve around the sun, Riccioli attempted to present his reader with as complete a summation of past and contemporary astronomical debate as possible. He does so in a remarkably balanced manner, presenting not only the findings of his principal protagonists, Ptolemy (the geocentric system), Copernicus (the heliocentric system) and Brahe (the geoheliocentric system), but also the results of observations of other astronomers such as Galileo and Kepler, among others. This and the encyclopaedic nature of his work ensured its continuing popularity in seventeenth-century Europe.

Riccioli, Almagestum novum (Bologna, 1651), Diagram of his own system. 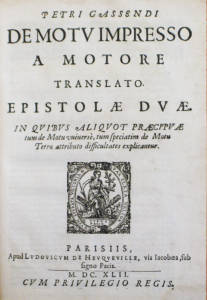